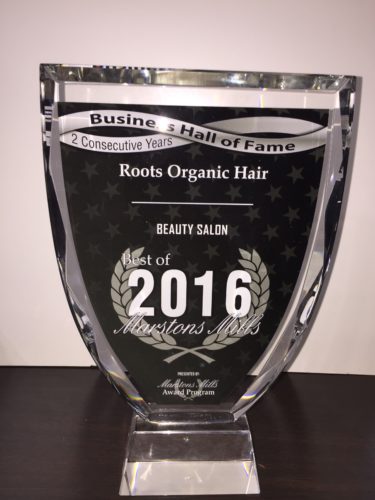 Roots organic salon has been approved for the first on-the-job training program in hair dressing for Massachusetts. We have fought long and hard to help the next generation of students be trained by seasoned professionals in the field, and the students won – no more student loans,
students get paid at Roots to go to school!

By Kerri Kelleher
[email protected]
Empire Beauty School in Hyannis will close its doors Tuesday due to dwindling enrollment. Students will be given the option of transferring to another Empire Beauty School – in Boston or Providence – or receive transcripts and a pro-rated refund of their school costs. Read More

A hairy situation: Salon owner buoyed by federal effort to crack down on for-profit schools

Written by Noah Hoffenberg
Vincent DeWitt photos
Holtzman, 72, the owner of Roots Organic Salon in Marstons Mills, has been waging a decades-long war against the hair schools that teach the process and requirements to pass the state certification test in the commonwealth. Read More – November 5th, 2014
Lenny Holtzman is the owner of Roots Organic Hair, a Massachusetts-based salon that is dedicated to promoting and supporting a cleaner environment, world class education, and healthier and happier clients through the use of chemical-free services and products and natural-looking hair highlighting.
Read More Selects Lenny Holtzman as a Featured Member of the Executive and Professional Registry
Mr. Holtzman, who studied cosmetology at Dale Academy, opened his first salon in 1965 in downtown Boston, called Hair I Am. He opened his second salon, Tangles, on Cape Cod Read More

Madison Who’s Who Recognizes Lenny Holtzman
Being at one with nature is an important philosophy of Lenny Holtzman’s talent, art, and craft: the sum of which form his life’s work. From his start and throughout, his high standards and inventive techniques catch the eyes of the elite. Read More

Selects Lenny Holtzman as an Honored Member of the Executive and Professional Registry
Holtzman, who studied cosmetology at Dale Academy, opened his first salon in 1965 in downtown Boston, called Hair I Am. He opened his second salon, Tangles, on Cape Cod Read More

A costly lesson at for-profit training schools
As graduates leave for-profit trade schools with plenty of debt but not enough skills to get hired, attorneys general are taking a closer look. Read More

Roots Organic Salon has 30 years experience providing wedding hair services. We provide hair care services for the bride and groom and for the wedding party as well as all the invited guests. Roots has provided services in the past for such noted families as the Kennedys (Maria Shriver and Arnold Schwarzzeneger and Caroline Kennedy), bringing in hair stylists from such prestigious designers as the Paul Mitchell team from New York, and also providing all services needed such as limousine transportation, catering, etc.

Roots Organic Salon is the only hair salon on Cape Cod that has the expertise and experience to provide hair services for large weddings and events. Roots is available to do wedding parties from 10 − 200 people. Roots has been an innovator in proposing educational change in our hairdressing schools for over 30 years.

Presented by the office of Demetrius J. Atsalis, Massachusetts’ State Representative, Roots has written several pieces of legislation that are before the House and Senate for review: Our Children face an education system today more threatening to their future than any generation in history....click for more.